00:12 Anna Bell: Hello, everyone. I’m Anna Bell, and welcome to another episode of Main and Mulberry. Today, I’m thankful to have with me Kevin Essary of Parham Bridges Tennis Center, in Jackson, Mississippi, with us today. Kevin, thanks so much for taking the time to talk with us.

00:30 AB: Yeah, absolutely. So, let’s kinda get started by addressing the elephant in so many rooms right now. Let’s talk about how the tennis center has been affected by the social restrictions of the COVID-19 pandemic.

00:45 KE: It was a little touch and go for a while, it got a little sketchy there, I think. Just like everyone else, we were shut down for almost two weeks to a month there.

00:58 KE: We’re completely shut down, yeah. They actually barricaded the entrances to our park. It’s a city park where I work, so it’s… Yeah, they shut us down completely. Nobody could get in or out for a few weeks there.

01:14 AB: Yeah, so I heard you guys have an active retail shop, tell me about that. Was that shut too, or were you guys able to shift to e-commerce or do some kind of curb side pick-up, anything like that?

01:28 KE: It was shut down for a couple of weeks completely but we do a lot e-commerce stuff, which was a little bit hard ’cause we couldn’t get anybody in to get any deliveries into the shop either. So the in-store shop was closed down for a few weeks. We did some e-commerce but that was, yeah, hard as well ’cause we couldn’t get any shipments, so. Really the thing that did pick up, as far as e-commerce goes, is kids’ tennis rackets. For some reason, I don’t know why, everybody wanted to buy…

01:57 KE: Yeah, they have these little packets where you can get like a kids net that you can set up at home, with a couple tennis rackets, too. So I guess everybody was just trying to get outside with their family. So there’s that…

02:09 AB: You know that parents are trying to get these kids out doing something. That has to be what it was. Yeah. So, Kevin, what were you doing in those weeks during the shut-down, how are you trying to stay connected with people in the community and the tennis center?

02:24 KE: We’d send out some Instagram posts, Facebook posts stuff like that, little informational, little lesson plans, stuff like that that you could do at home. Even at home workouts you can do for tennis. Besides that, mainly just sat on my tail and did what everybody else was doing, got to spend some time with the family.

02:48 AB: Tell us what today’s normal looks like for you guys now. Are you back operating fully? Are you doing anything different with people coming back onto the courts?

03:00 KE: We are. We have some, I wouldn’t say strict guidelines, but some guidelines we’re making people abide by kinda based off what the USTA that governs our tennis set out for us. Also, instead of bringing everybody out at the same time, we’re starting to bring everybody out for their specific level. So, as before we had say, a beginner and an advanced player coming out together for an event, now we separate them so that the beginners would come out first, the advanced player would come out two hours later. Then we’re also separating by courts, too. So at our facility we have a bank of four courts. So when the kids come out of our clinic, we actually put some in court one and then we separate them by two other courts, like three courts over, for the other kids to play.

03:48 KE: We’re trying to work with everybody to like four people per court, too.

03:53 KE: And this is one of those where people don’t really get that close to each other, anyway. So it’s fairly easy to play tennis without being that close to somebody.

04:03 AB: Right. Have you had any pushback from members as far as maybe switching up the scheduling? It sounds like you’re having to do that a little bit.

04:12 KE: Not really. I think everybody kinda is on the same page. Everybody understands. Better safe than sorry, sort of thing.

04:18 AB: Yeah, that’s very true. Very true. Kinda tell us what has it been like on the courts. Has there been some… Everybody is thankful to be out there. I can’t imagine everybody wearing masks on the tennis courts right now.

04:32 KE: You can’t really breathe in a mask, unfortunately. We have quite a few doctors that play out there. We talked to them about wearing the gloves as well, if that would help, and they say you sweat through the gloves. ‘Cause really, you can’t really do the mask or the gloves, but it’s not as bad.

04:52 KE: Yeah. I think everybody… During this, it’s kinda weird. You couldn’t really go anywhere, so everybody was trying to get outside. Whereas before, you could go outside and, yeah, it was less busy. We probably got… I’d say we probably got 40 or 50 calls a day, people asking when the courts are gonna open back up. I think just to get with their family members or friends, close friends, people that were in quarantine together with them. So, people were trying to get outside.

05:20 AB: Yeah. Oh yeah, itching for some interaction. I think that’s what it really is. We just can’t be all separate from everybody for so long.

05:31 KE: It was really nice, the weather was perfect here, too. And fortunately…

05:35 AB: Yeah. Oh, yeah. We’ve had a good spring, that’s for sure. How important do you think it is for all of us to have some level of physical activity, like taking lessons during a unique time like this?

05:48 KE: I think it’s extremely important. I mean there’s been a lot of studies that show that playing tennis and maintaining some sort of physical fitness level as you age, actually extends your life quite a bit. Just everybody. Everybody’s gotta stay healthy and get outside. I’ve probably put on 10 pounds during this thing.

06:13 KE: Yeah, I heard one time you lose 25% of your fitness level every two weeks. I don’t know what truth there is to that. It kinda makes sense ’cause after about two weeks of sitting around, I feel pretty sluggish.

06:24 AB: Oh, I know it. I’m right there with you. I know. I’m itching to get back to some kind of normal exercise routine again.

06:33 AB: I know it. So kind of talking about that, what are you envisioning the summer months to look like over at Parham? You guys normally host tournaments, right? And will everything be back on the court as usual?

06:57 KE: But there’s gonna be some restrictions. So everyone’s gonna use their own tennis balls, label their balls, initial their balls they play with, so you don’t have to share a bunch of tennis balls with people.

07:08 KE: Gonna be separated by courts. So like for a tournament, one court will play, there’ll be a court in between and then the other court will play.

07:18 KE: Yeah, we’re gonna go as planned just with the restrictions in place.

07:23 AB: Okay. Now you said kind of initially about some screenings and making sure everybody is healthy before they kinda come through the doors onto the court, is there anything… Are you guys upping anything like that, any sanitation procedures, anything like that?

07:38 KE: We are. The main thing you have to worry about with playing tennis is the use of the tennis balls since everybody… It’s hard to play without touching the tennis balls. You get sweat all over them and that sort of thing. So we’re trying to label the balls that people use, so they have their own specific balls. And you can actually pick up a tennis ball and hit it to the other side, to the other player, without touching it with your hand. So [08:00] ____. The kids when they come out, we’re not practicing serves. Usually, we have a full like basket of balls, and the kids will just pick a ball out of the basket, serve it, get another ball out of the basket. So we’re just not doing serves right now, and we’re wiping down all the baskets in between each lesson, too.

08:17 AB: I gotcha. Talking about the kids, what’s the summer gonna look like for their camps and clinics? Will you still be hosting those?

08:42 AB: Right, right. And adults, too. Are adults still taking their lessons with you?

08:48 KE: Yeah. Adults are coming out. And they’re… I’ve seen more adults actually play than kids, which is kinda odd, ’cause I know kids aren’t really as susceptible to get it as adults are, from what I’ve read, but I think people are just more protective with their kids.

09:05 AB: Yeah, for sure. And we’re, like I said, itching to get outside and do something, see somebody else, get moving again.

09:31 KE: Yeah, I’d say wash your hands, yeah, especially after you use the bathroom. Hold in sneezes. I’d say try not to sneeze on anybody.

09:49 AB: Yeah. What about tennis, though. You’re encouraging people to come out and keep playing?

09:55 KE: Oh yeah, for sure. I mean, like I said, there was a… It’s actually a study that came out USA Today put out a post, a big article written by a doctor that said tennis might be the perfect sport for social distancing. And I agree with them. You can play tennis without being within 30 feet of somebody else. So it’s a great sport to play and practice and stay healthy with without having to be that close to somebody.

10:35 AB: Yeah. [chuckle] In their own line, I like it. Well, Kevin, we sincerely appreciate your time and your insight today. Thank you so much.

More From Main and Mulberry Podcast 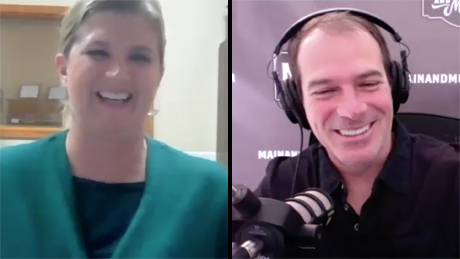 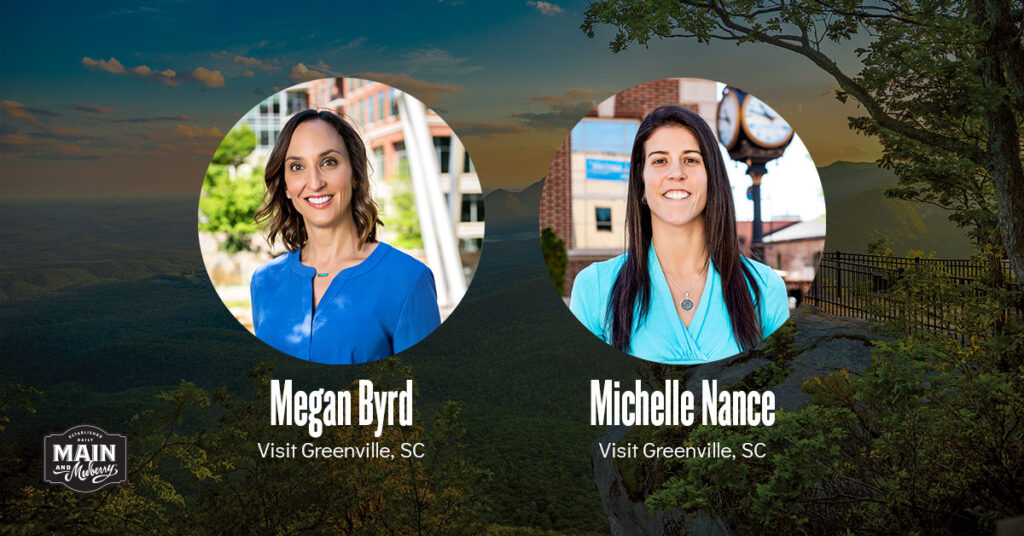 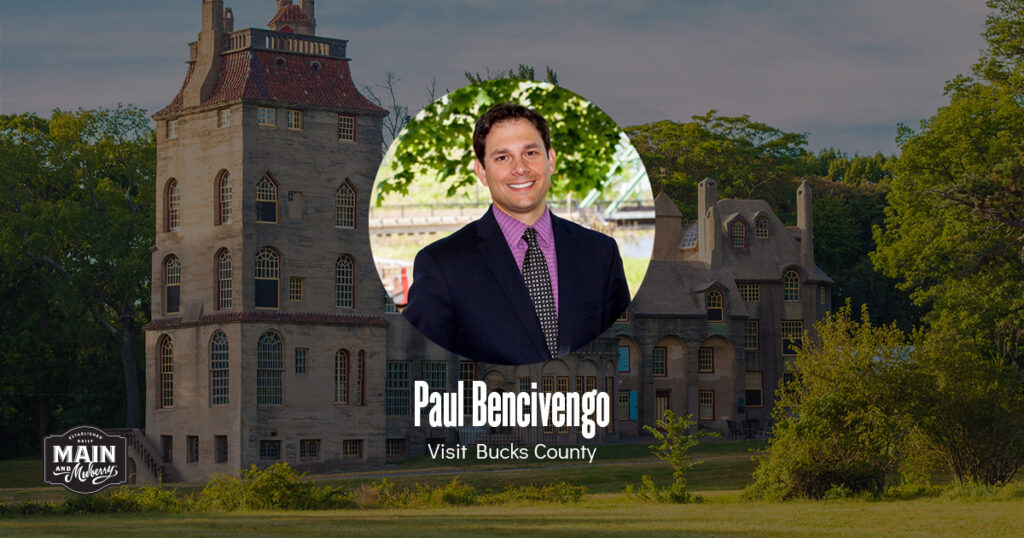 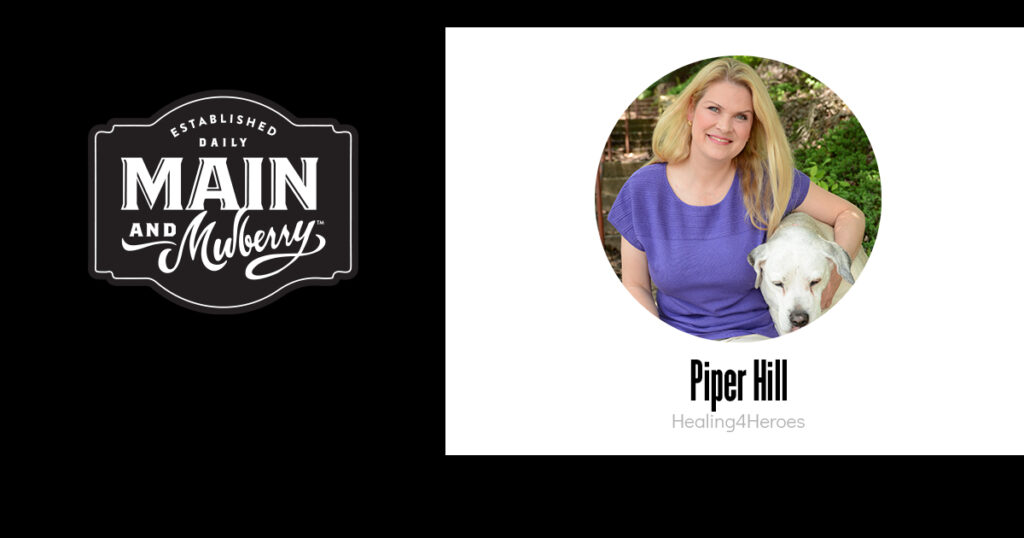 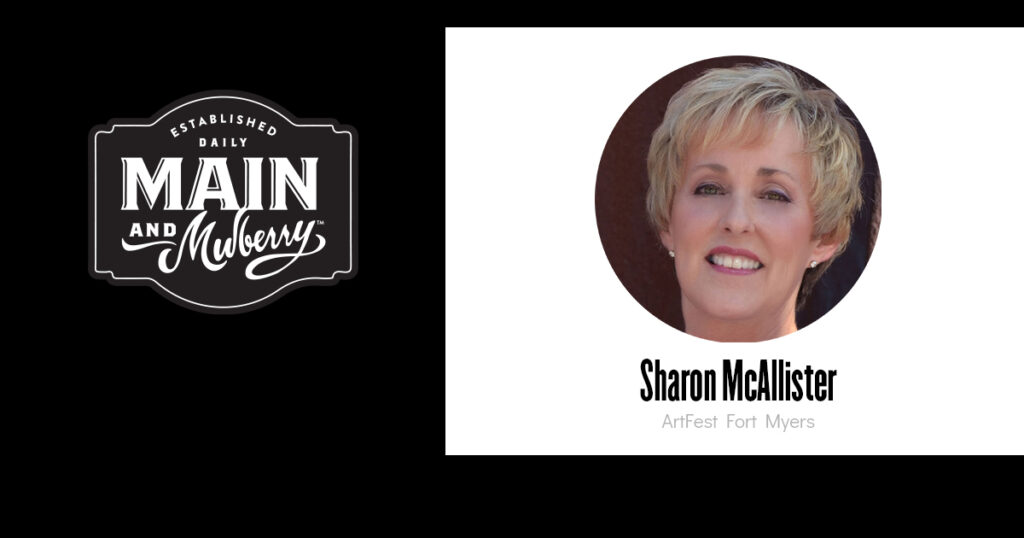 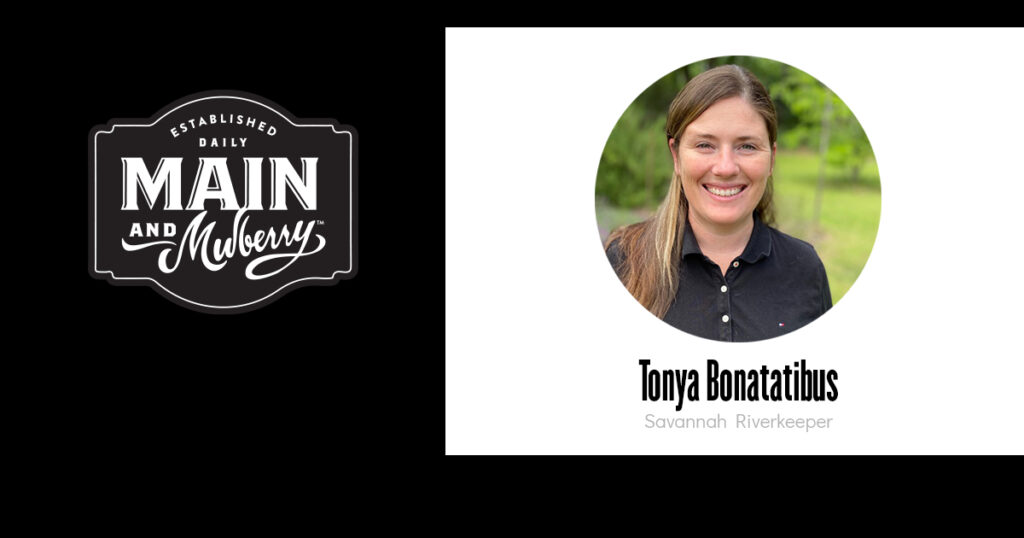 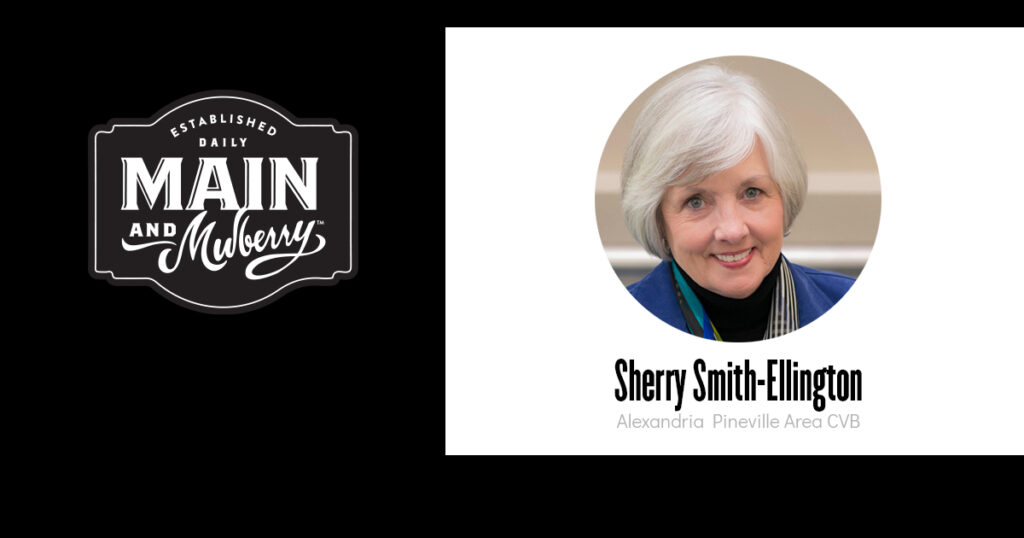 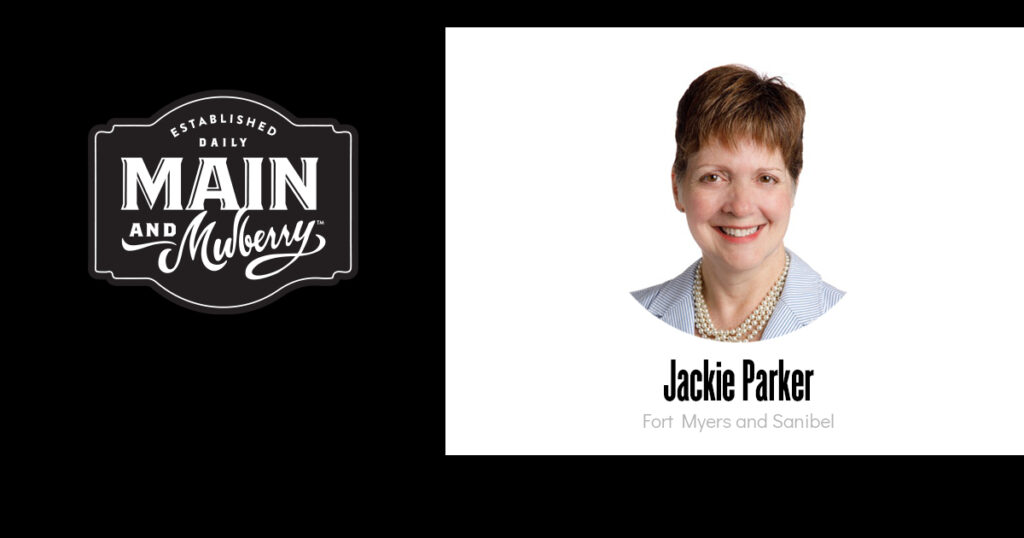 Main and Mulberry Podcast – Jackie Parker, The Beaches of Fort Myers and Sanibel